PLC Meaning and What is the PLC?

There are languages ​​and programs developed by each company for PLC programming according to plc types. Some are paid and some are offered free of charge.
It is possible to control the entire factory with a single PLC. Of course, PLC alone should be useless input and output modules. The input and output modules are added externally on some compact PLCs and on others as modules.

PLC (Programmable Logical Controller is an automation device used in the production departments in factories or in the control of processes such as control of machines.

Unlike normal computers, PLC has many inputs and outputs (I / O). The biggest pluses are designed to withstand electrical noise, temperature differences and mechanical impacts.

The biggest difference of PLCs from microcontroller cards in the sense we know is that they are designed to operate in much heavier physical conditions (high or low temperature, dust and humidity, mechanical vibration and impact, electronic noise and noise, etc.) while maintaining their stability.

PLCs of different brands install an operating system according to them. And there are different programming software. This controller system scans the input information at invisible speeds and works accordingly to respond to the output information in real time. PLC plays a big role in bringing out more and more high quality products in a short time, making production with very low error rates. 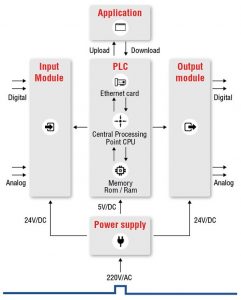 How to learn plc programming