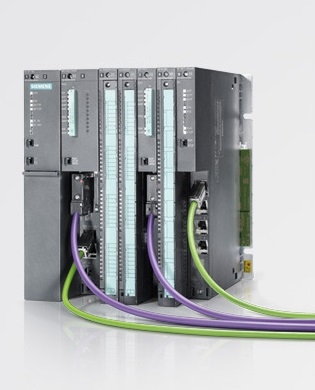 Communication modules provide data exchange between PLCs and input-output units or between other personal computers. These modules can be operated by direct connection (point to point) or over a network. In a one-to-one connection, the connected processor includes a dual interface. While one computer port is accessed by the programming device, communication is provided through the other. Thus, it is possible to include more I / Q in the system. In addition, data exchange is provided over the local area network (LAN). PLCs, personal computers, field staff, and workstations (workstations) can be found in these networks. Monitoring of the process on the monitor and printer reporting is done through such communication modules.

These racks, where PLC cards are installed, differ according to PLC classes. Within the PLC group, S5-90 and S5-95 are directly mounted on rails and are not mounted on any rack. S5-100 cards are mounted on elements called submodules. Communication is provided with the bus line on these elements.

In addition, these modular elements provide ease of assembly. Submodules are mounted on the rail. Boards belonging to S5-100 type PLC are also mounted by screwing on submodules. Submodules fulfill the tasks of submodules in S5-115 systems. Submodules are not compatible with the rail system and are fixed with screw mounting. These elements have different types according to need.

Some models can only be equipped with input-output cards, while others can also be equipped with various special modules. Fan units can be mounted on the bottom sides of the S5-115 system to cool some cards that can draw high current. It also contains a power supply that supplies the cards used in the PLC. In addition, there are cooling fans in this power supply.

For example; In a system consisting of two stations, the separation process will be made according to the measurement result at the 1st station and the 2nd station.

Processors are not always communicating in this and similar communication systems. Most of the time, it consists of a CPU (master) in the center and its peripheral units (slaves) used to transmit the input and output data from the first different stations to the center. This structure is called the BUS system. S5-155U is the main PLC. Information from other PLCs is compiled in this PLC.

Here a question may arise. It can reach a large number of inputs and outputs in PLC systems. Therefore, should it be used in communication with stations and peripheral units using a large number of CPUs with one CPU per station, or using a single processor? what is plc?

This is primarily a matter of the size of the systems and the interdependence of the stations. First of all, it means controlling different systems with a single CPU, it means locking the systems with each other. That is, a failure of either system or processor will cause the other system or processor to fail. In addition, too long the program means that the cycle time, ie the update time of the inputs and outputs becomes too long. This is also an undesirable situation in programming.

However, using a different processor in each system means the cost of the system increases. Today, there is a BUS system produced by many companies producing in the field of automation. The main features that distinguish these systems from each other are as follows.

In this section, BUS systems used for data exchange,

How to get data from plc to excel